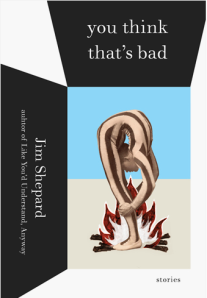 I like a review that starts with stating a very obvious truth: that more readers out there out to know how amazing Jim Shepard really is.  Here is the review:

It’s not that Jim Shepard isn’t known, exactly; it’s that he isn’t known enough. Although his 2007 collection of short fiction, “Like You’d Understand, Anyway,” was a finalist for the National Book Award, he has never fully caught on with readers — his work is too diverse, too out there, too plain unclassifiable to find a place among the silos that define so much of our conversation about writers and books.

That’s to our detriment, for, beginning with his first novel, “Flights,” in 1983, Shepard has traced his own odd line through contemporary fiction, engaging everything from historical figures to the most outrageous landscapes of the imagination to fuel his work. In “Nosferatu” (1998), he builds a novel around the German Expressionist filmmaker F.W. Murnau; “Project X” (2004) describes a Columbine-like school shooting from the point of view of one of the attackers, a confused eighth-grader who seems as surprised as anyone when the shooters’ plan actually takes shape. These are prototypic Shepard characters: adrift, a bit uncertain, with a strangely futile sense of destiny. “At this point,” the narrator declares in “The Netherlands Lives With Water,” “each of us understands privately that we’re operating under the banner of lost control.”

“The Netherlands Lives With Water” is one of 11 stories in Shepard’s new collection, “You Think That’s Bad,” and it’s a stunner: a look at a future Holland in which climate change has created a flood crisis so extreme that it’s no longer certain how or whether the country will survive. “It’s the catastrophe for which the Dutch have been planning for fifty years,” Shepard tells us. “Or, really, for as long as we’ve existed. We had cooperative water management before we had a state.” What such a story really traces, however, is the point at which cooperation, management, all the tools of civilization may no longer be enough.

You can find the review here.