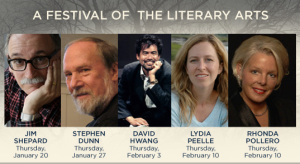 This will make you wish you were a student at Rollins.  From the website:

Some of the best writers from across the United States will take part in the 2011 Winter With the Writers, A Festival of the Literary Arts. In keeping with the College’s long-standing commitment to contemporary literature, the 2011 season features a diverse mix of the country’s most respected authors, including novelist and short story writer Jim Shepard and Irving Bachelor Professor of Creative Writing for 2010-11 David Henry Hwang.

The 2010 season of Winter With the Writers, A Festival of the Literary Arts, spotlights four major contemporary writers–the standing American poet laureate, two National Book Award winners in fiction and non-fiction, and the fine author of a novel made into a critically acclaimed movie–adding to the Rollins College tradition of creating a local literary community of international note. Before them, Sinclair Lewis, Zora Neale Hurston, Marjorie Kinnan Rawlings, Carl Sandberg, Michael Ondaatje, Maya Angelou, Derek Walcott, Margot Livesey, Billy Collins and scores more writers have shown audiences in Central Florida how, out of the imagination, a stream of story moments or images can collect and then be arranged into narratives or lyric interludes to tell us how we live and who we are.

Jim Shepard will be joining this program on January 20, 2011.  Here’s a quote about Jim on their website:

“His narrators are a varied lot — a cosmonaut in love, Aeschylus at war, a kid packed off to summer camp. But what they share in common is a proximity to disaster and an uneasy sense that the distance between “what we want, and what we do” is as wide as it is deep. Everybody hurts. Everybody knows this. But Shepard knows it better. He also knows how to write his way around the mawkish side of this hurting. Stories that in lesser hands could easily go soft and sentimental are rendered here with clear eyes and true grit.” – Benjamin Alsup, Esquire.

To learn more about the Winter with the Writers Series at Rollins College, click here.

One thought on “Winter with the Writers Series at Rollins College”